I live on Goodreads but I promise to figure out Booklikes eventually. Almost instantly I cast Jake Bass as Ollie in my imagination. 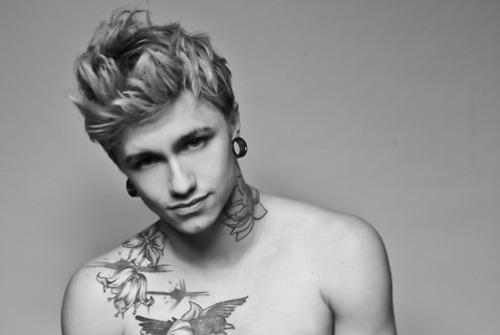 Young, tattooed, pierced, on the smaller side... Jake with purple hair is not that hard to imagine.

Beyond that pleasing visual, however, though, I really liked Ollie and how multidemensional he was. He was more than just a cute skater kid. He was artistic, had a vision for his future. But he is young. He knows what he wants but is afraid to ask for it. He is carrying emotional baggage from a bad relationship not even knowing what a normal relationship looks like.

Ben had the gift of always saying the wrong thing, even when he was trying to do right. I wanted to slap him upside the head several times and say "what the heck"? His physcial condition stole his confidence and while the self-pity sometimes caught up with him, he didn't wallow in it. Fortunately, Ollie was patient for someone so young. He wanted Ben and was willing to stick it out. Ollie's fasination with Ben's condition was the sort of quirky coincidence that made these two MC perfect for each other.

On the downside, there was a bit too much medical talk. I found it a bit boring and it made me a bit squeemish at times (but that's just me, it doesn't take much to gross me out). The Family We Make
Kaje Harper